We have been in Springfield, MO for a week and a half now and have decid­ed to extend our stay anoth­er few days. Kenieshiear and I real­ly like it here. Also, we’re not sure where we want to go next.

We’ve tak­en a look at a few hous­es for sale, and even made an offer on one. That offer fell through, but it’s pret­ty sur­pris­ing how much I’m ready to find some­thing. There is a house that I real­ly like and it’s prob­a­bly in our price range if we fina­gle a few things. The tim­ing might not be right, though.

Leaving the cen­tral Texas area turned out to be much more dif­fi­cult than we antic­i­pat­ed. It was as if we had been trapped in a grav­i­ta­tion­al well or some­thing. It took us an extra cou­ple of hours to get the car packed up, even though we had just packed it to stay at the con­do a few days ear­li­er. The plan was to stop by the house to pull some things out of the garage for our ten­ant; that took longer than antic­i­pat­ed. We did­n’t get far until I real­ized that I had lost my keys; we had to go back to the house to track them down.

Our clan final­ly got to the high­way around 4pm. I had hoped to be on the road by 11am. It meant a night dri­ve and a late night arrival in Springfield. The girls did­n’t want to sleep because they were wor­ried about miss­ing out on pass­ing into Missouri, even though that was hours away. We still had to get out of Texas and go through Oklahoma first! We had 9 and a half hours of road time, and every stop added at least 30 min­utes on top of that.

It took a while to get out of Texas and into Oklahoma. By the time we crossed the bor­der, it was dark. Kenieshiear had hoped to stop by a lit­tle Amish shop off the side of the road, but they were closed. We did get to see the casi­nos all lit up in their gar­ish fash­ion, though.

Driving through Oklahoma was long and bor­ing. Not much to look at dur­ing the day, and less at night. It did give me an oppor­tu­ni­ty to think and men­tal­ly com­pose this post. My fam­i­ly slept and I thought and drove. I think the worst part was the low speed lim­it. Whenever we drove through a small town, the lim­it would drop to 45 or less for a mile or two and that threw off pace by more than I expect­ed.

After sev­er­al hours in Oklahoma, we final­ly made it to a toll road with decent speed lim­its and were short­ly after that enter­ing Missouri. Just a cou­ple of hours to go! At this point, every­body was asleep, though Kenieshiear would wake up and ask me if I was okay every time we hit a bump in the road.

I was pret­ty tired, so I don’t remem­ber too much to add for this leg of the trip. We safe­ly made it to our airbnb around 3ish. By the time we got the chil­dren and dogs and stuff out of the car, it was 4ish. The chil­dren work us up at 7ish.

[I know my last post (from December!) was about a road trip, and I have a nev­er-pub­lished recap of that trip, but I real­ly intend to do a bet­ter job with updates this time around!]

We are off on anoth­er grand adven­ture! We are real­ly going all-in this time, too. We have leased out our house and are in the process of buy­ing a con­do not too far away, but that has­n’t closed yet and will prob­a­bly not close for anoth­er month or so. In the mean­time, we are going nomadic, pack­ing the dogs, chil­dren, and all of our neces­si­ties into the fam­i­ly car.

Our first stop will be Missouri, but that’s about the end of our plan­ning.

At the moment, we are spend­ing a few nights in the con­do we have put an offer on. The views are mag­nif­i­cent, and I have been work­ing from the bal­cony. We will be pack­ing up and head­ing north soon!

Next week, we’re pack­ing up the chil­dren and the dogs. We are head­ing out on a grand adven­ture to see the win­ter.  To begin, we’re head­ing north into the plains.  We will spend a week at a house in Missouri.  I will be work­ing from there, because I don’t have any PTO left.  It is not the best sce­nario, but I will make it work!

It is the first extend­ed trip we’ll do as a fam­i­ly since my youngest was born, and it is the first ever with the dogs.  I’m still iffy about the dogs, to be hon­est.  My wife thinks it’ll work out just fine, though, and I trust her.

You may have noticed that there are pho­tos of me on my posts, but there are not any of my chil­dren.  This is an inten­tion­al act on my part, and it is dif­fi­cult to accom­plish.  Most of my pho­tos these days fea­ture at least one of my chil­dren.

So, why no pic­tures?  The inter­net these days is awash with pho­tos of peo­ples’ chil­dren, and why not?  Parents are under­stand­ably proud of their lit­tle ones’ accom­plish­ments and want to show them off.  I do too, and I do post plen­ty of videos and pho­tos, but with access lim­it­ed to fam­i­ly.  I don’t even share with my friends.

Don’t get me wrong, I don’t think it is right for every­body.  It is my per­son­al pref­er­ence to keep our chil­dren out of the pub­lic eye.  You may have noticed that I don’t even pub­licly post their names.  I feel that it is impor­tant that I give them the clean­est pos­si­ble slate as they grow up.  I believe post­ing their names and pho­tos pub­licly is not going to help them in the long run.

END_OF_DOCUMENT_TOKEN_TO_BE_REPLACED

I can’t take cred­it for this title.  I heard it dur­ing a Celebrate Recovery tes­ti­mo­ny and it got me think­ing.

Lately, I have been strug­gling with the choic­es for my future.  I am strug­gling with mak­ing the choice between rid­ing out my cur­rent job, tak­ing a new one, or jump­ing into my busi­ness with­out a net?  Where am I sup­posed to be lead­ing my fam­i­ly?

END_OF_DOCUMENT_TOKEN_TO_BE_REPLACED

Fast-for­ward 5 and a half hours and we are pulling up to the hotel. The dri­ve was 1 hour, give or take, and it took us an hour to load up the car. Before that, we hasti­ly packed every­thing we thought we would need, but there was­n’t enough time to do that well.

We are on the sec­ond night of this trip, and this is going bet­ter than the pre­vi­ous night by far. I have learned a lot in these two days. Things to pack and things not to pack. How to get the lit­tle ones to go to sleep while shar­ing a cramped hotel room. How to keep them that way. (Hint: it involves hang­ing out in the hall­way, prefer­ably with a beer.)

END_OF_DOCUMENT_TOKEN_TO_BE_REPLACED

Last week, we dug up the girls’ tablets from their hid­ing place.  I spent a hour adding time lim­its and lock­ing down the avail­able apps to just a few pre-screened, edu­ca­tion­al games.  They have Amazon Fire Kids Edition tablets, which I am extreme­ly hap­py with.  (I might do a post lat­er on how I have them set up.)

On the night before we revealed them, we told the girls that if they were well-behaved and went right to sleep, they would get tablet time the next day.  My wife and I both prayed real­ly hard that they would take it seri­ous­ly.  As it turned out, they did.  The next morn­ing, I hand­ed them the tablets, helped them get start­ed, and got my work done in rel­a­tive qui­et. END_OF_DOCUMENT_TOKEN_TO_BE_REPLACED

I don’t nor­mal­ly get into pol­i­tics on a pub­lic forum, but I need to get some things off of my chest. The lat­est news about chil­dren being sep­a­rat­ed from their par­ents at the bor­der appalls me.  I have some thoughts.   END_OF_DOCUMENT_TOKEN_TO_BE_REPLACED

Fathers day this year went great! Bacon on a stick at church, got two “Dad rocks!” rocks from each girl (they were in class for both ser­vices, so they got to do the project twice.) Got some stuff done around the house, and end­ed the day with a grilled rib-eye.  All in all, I felt loved and cher­ished.

I have been hav­ing a hard time late­ly, allow­ing the stress of my job and wor­ries about par­ent­ing to affect me more than it real­ly should.  This father’s day real­ly lift­ed my spir­its.  Praise the Lord for all the good He has placed in my life!

Husband, father of three, concerned citizen. (Trite as that sounds.) I'm also a software engineer and a entrepreneur.

What most people think hacking is versus what hacking really is. 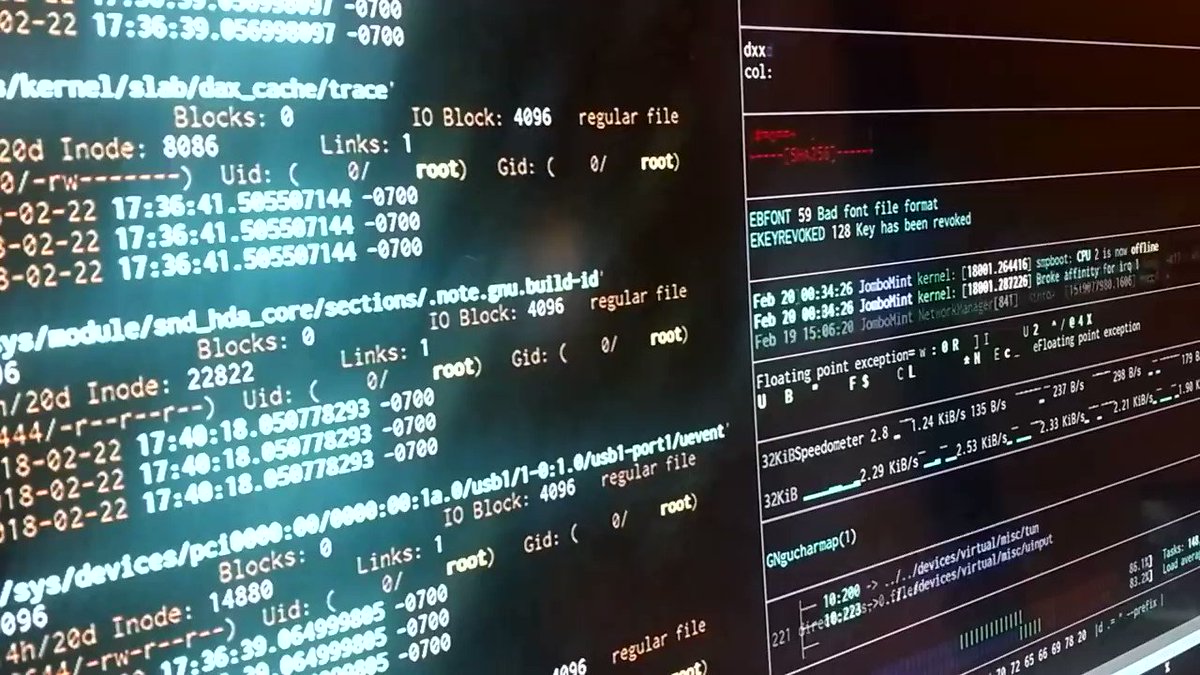 The country has to stop thinking about things a week in advance & then wondering why they don’t work. If they wanted schools to open in September, May. May was the time to work on this. Not August. 20/

Just finished "The Naked World", by @Dice_Carver. Second book in his Jubilee series. Loved it! Love the series and the incredible and frighteningly plausible future world it describes. Cannot wait for the final book! #cyberpunk #books #bookstoread #mybookshelf

1/ Time for all self respecting "adults in the room" (so called) to stop coddling the man-toddler. At this point they have a moral obligation to say, the president is mentally and emotionally deranged and intellectually stunted. His brain is broken. We are done here...